Where the transcript was published

How the transcript was made

Video footage from a one-to-one clarinet lesson was analysed and coded by hand using ELAN (Brugman, 2004). Transcripts were then exported into Microsoft Word for final formatting and inclusion of specific symbols.   Translating these transcripts into LaTex for publication has been a challenge since many of the symbols come from different packages and these have to function inside a verbatim environment to allow for control over line and word spacing.

Rationale for the design

It is surprising how few authors looking at interaction in a musical context attempt to represent the musical sounds produced. When they do, one approach is to use musical notation to locate activity on a musical timeline, for example Figure 1 (Holck, 2007). 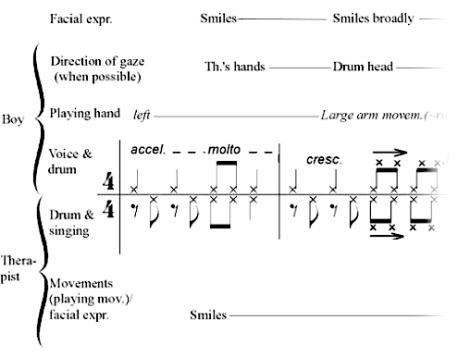 However this transcript presentation is less meaningful for those who do not read music and does not necessarily draw out the interaction features that a conversation analyst would be interested in. In applying the rules of conversation analysis to musical utterances, our notation needs to be comprehensible to those who are used to working with transcripts, whilst being able to capture the interactionally relevant aspects of music production.

A system of notation was devised with two main aims: to make representation of the music understandable for both musicians and non-musicians, and make it possible for a written transcript to convey the full interaction, whether utterances were verbal or musical. The starting point was established notation for conversational analysis as shown in Figure 2 (Sacks, Schegloff, & Jefferson, 1974). This was adapted to produce notation for musical sounds as shown in Figure 3 (Sam Duffy & Healey, 2013).

This allows us to analyse and document a musical exchange using a combination of the musical score and our adapted transcript notation, as shown in Figures 4 and 5 (Sam Duffy & Healey, 2013).

Purpose of the transcripts

This work has developed to include comparison with remote music lessons mediated by video conference (S Duffy et al., 2012). There is a requirement to be able to show each participant’s direction of gaze in real time and in the correct place in the dialogue. A script has been developed using Processing (http://www.processing.org) which visualises transcripts exported from ELAN to facilitate this analysis. This is very much a work in progress at this stage but is becoming a useful tool.